I appear to be knocked up.

I can’t quite fathom it. My research said 3-6 tries on average for an IUI, so I was preparing- financially and emotionally- to hunker down.

I was sure I wasn’t. I felt all crampy, exactly like I normally do when my period is on the horizon. I went out dancing with a friend and had two glasses of wine. She commented that a lot of times people seem to know when they’re pregnant and if I thought I wasn’t, I was probably right.

I woke up at 2am and I suddenly knew I was pregnant.

Of course, I say I knew easily in this narrative. It could just as easily have been ha-ha, remember when I woke up and thought I was pregnant?

I waited until 4am to take the test. Such a light line on the wondfo that it was practically invisible. I thought I was crazy. Went back to bed.

I took another wondfo when I woke up. Another light line. So I went out to get a fancy First Response test. Three tests now. All faint lines.

This is a time it would be nice to have a partner, because who do you tell? I texted my best friend from college. Still sitting on the toilet. Staring at that faint pink line.

I understand, of course, that I’m actually pregnant. And I’m excited, of course. But I’m also terrified. So much can go wrong, especially in this first trimester.

Now I’m trying to decide who to tell, because I’m awful at keeping secrets, and I don’t want to be in this totally alone. Also how to people handle walking around like this and not blabbing to everyone?

My first prenatal appointment isn’t until the end of May. How is that possible? There’s so much to worry about. No one’s going to tell me what to do?

Me (on phone, to Nurse): So what do I do til then? Just hang out being pregnant?

Nurse: Pretty much. And take your prenatal vitamin.

If I calculate from my last period, even though I ovulated late, I’m due December 30th. So I don’t know for sure what YEAR my baby will be born! 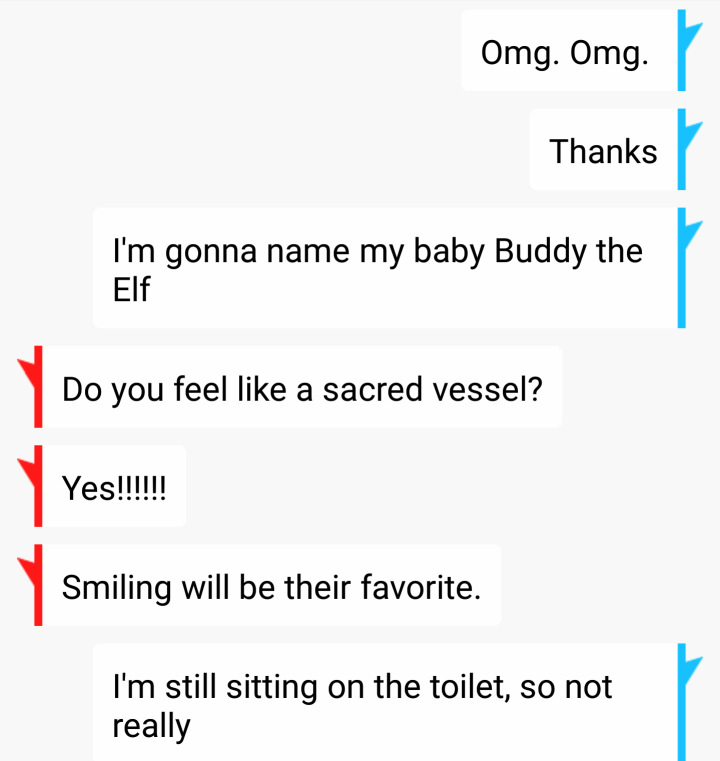 …and I’ll leave you with that golden image. I’m going to try to get some not crazy sleep.